The US architect Joseph Allen Stein (1912 – 2001) spent the last forty years of his professional life in India. A man driven by humanitarian and environmental passions, he worked on cooperative and low-cost social housing in California and then, troubled by McCarthyism, he took up work in Calcutta and later Delhi, exhilarating in the idealism and socialist enthusiasm of India as it emerged from almost a century of colonial British rule.

Inspired by the work of modernist architect Richard Neutra and others, Stein has been described as “building in the garden” – using the wider natural landscape to inspire appropriate structures made from local materials. He characterised his approach as “modern regionalism” and it can perhaps be seen as a precursor of today’s achingly trendy landscape urbanism movement.

Yesterday we visited one of Stein’s major buildings, the India Habitat Centre in New Delhi. Designed in the late 1980s, this is a place that provides office, conference and exhibition space for organisations working on habitat- and environment-related issues.

The design reminded me forcibly of London’s Barbican. It is monumental in scale, with concrete structures arranged in vast horizontal and vertical slabs, laid out around large airy courtyards, linked together by stairs and walkways. Given the heat of the Indian summer, many of the exterior spaces are shaded by delicate blue patio covers, casting intricate shadows and further blurring the distinction between inside and out. The courtyards are planted with a pleasing array of greenery – large pots and beds of evergreen shrubs and tall trees, providing a more human feel and scale amongst the concrete monumentality. Although rarely credited, Stein’s wife Margaret was responsible for much of the interior and planting design in his work, and the successful combination of their two styles is well illustrated at the Habitat Centre. 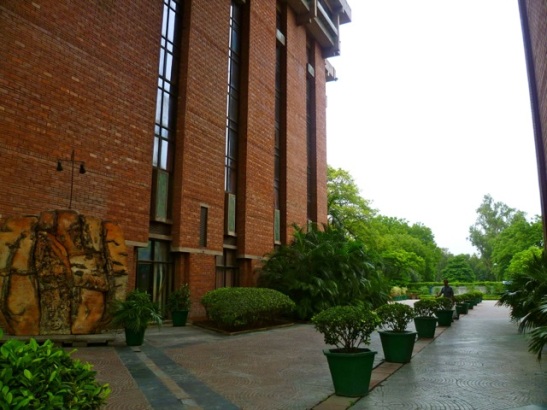 It was Stein who brought Garrett Eckbo to Delhi to work on Lodi Gardens (about which I blogged below), and who also designed the splendid American Embassy school attended by my daughter. Joe and Margaret Stein are a couple whose work I intend to research further.

15 comments on “American modernism in Delhi”