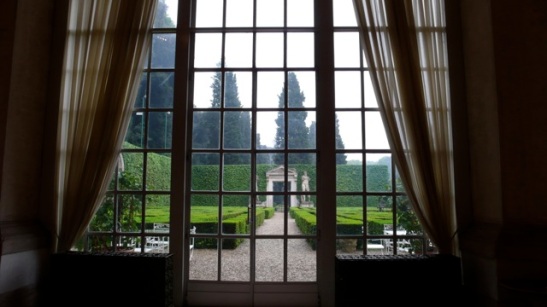 We were recently fortunate to visit the glorious sixteenth century Villa Madama, just north of Rome. Designed by Raphael, it was one of the finest Renaissance villas with its classically simple façade, vast windows and monumental courtyard. Inside are beautiful stuccoes, friezes and painted lacunar ceilings by various Italian masters, including (it is said) Raphael himself. 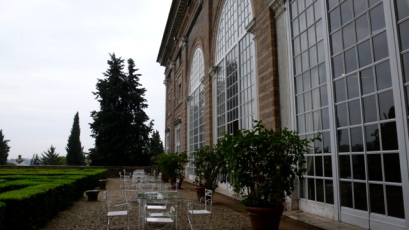 The history of the place features two extraordinary women. The first was Margaret of Austria (1522-86), the ‘madama’ after whom the Villa is named. 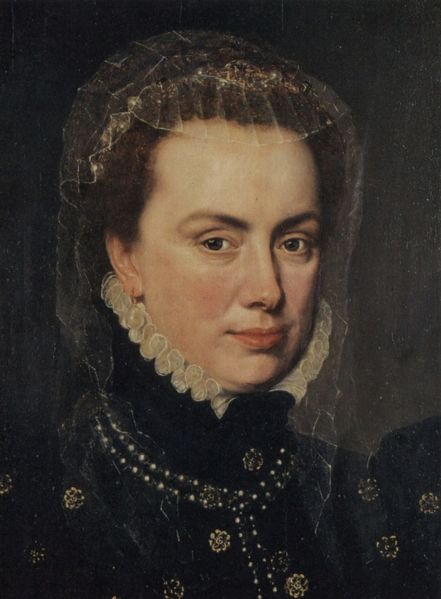 painting of Margaret of Austria from bildindex.de

The bastard daughter of the Holy Roman Emperor, Margaret was engaged at age 5 and married at 10 to Alessandro de’ Medici, Duke of Florence, illegitimate son of a Pope and a black servant. It was through him that Margaret became mistress of the sumptuous villa created for his father, Pope Clement VII. After the Duke was assassinated in a foolish tryst with another woman, Margaret married Ottavio Farnese, Duke of Parma, himself the grandson of another Pope. Only 13 when they married, the bridegroom was apparently overawed by his experienced, older wife (she was all of 15) and there are tales of dramatic bed-wetting and general reluctance to consummate the marriage. But Margaret managed to turn their union into a happy one, and later demonstrated her intellectual and diplomatic skills when she was appointed as Governor of the Netherlands for eight years.

After Margaret’s death, the Villa passed to the Farnese family and then to the kings of Naples. It gradually fell into disrepair and was for a time used as a farm, with animals herded into Raphael’s exquisite loggia.

Henry James visited in 1873 and wrote “The place has become the shabbiest farmhouse, with muddy water in the old pièces d’eau and dunghills on the old parterres…. Margaret Farnese was the lady of the house, but where she trailed her cloth of gold the chickens now scamper between your legs over rotten straw.” 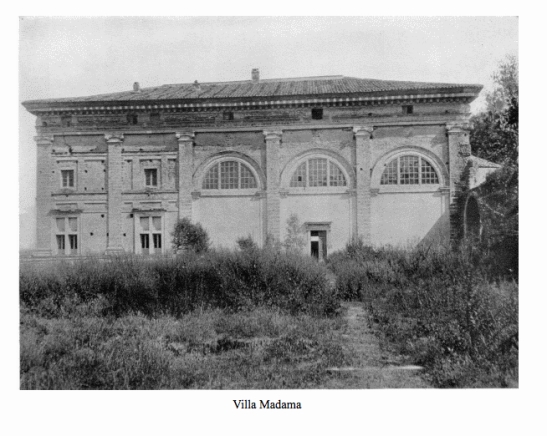 Photo of a dilapidated Villa Madama from “Romance of Roman Villas” by Elizabeth Williams Champney, published 1908.

Photo of Dorothy with Gary Cooper, from themave.com

The second woman prominent in Villa Madama’s history is the American socialite and heiress Dorothy Caldwell-Taylor (1888-1954). Impossibly rich, stylish and flamboyant (and by some accounts a spy), her many lovers included Hollywood film star Gary Cooper and gangster Benjamin ‘Bugsy’ Siegel. Her first, brief marriage was to British aviator Claude Grahame-White. Subsequently she wed the Italian Count Carlo Dentice di Frasso, very much her senior, and in the 1920s used some of her inheritance to purchase and restore Villa Madama, using plans by Marcello Piacentini.

In 1929, socialite and garden designer Norah Lindsay (best known perhaps for her work with Lawrence Johnston at Hidcote Manor) was commissioned by the Di Frassos to add herbaceous garden plantings to the garden. For many years Countess Dorothy threw lavish parties at the restored Villa for her friends from Hollywood and the Italian royalty, before it was appropriated by Mussolini in the early stages of World War II. Today it is used by the Italian Ministry of Foreign Affairs to receive foreign dignitaries, and is not usually open to the public. 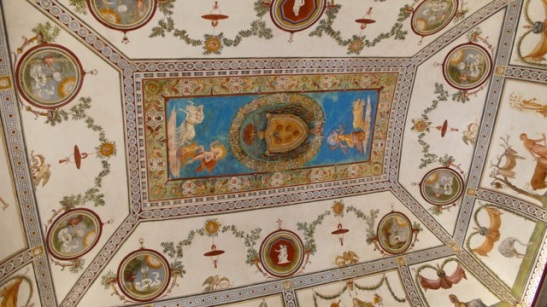 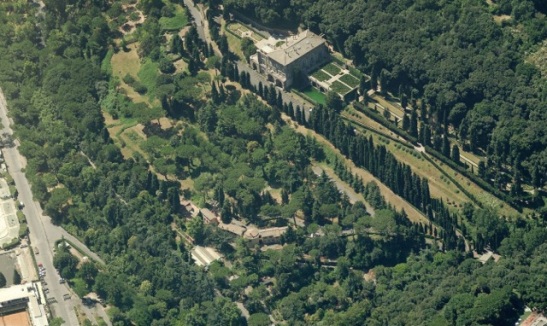 Aerial view of the villa and its grounds today, from http://virtualglobetrotting.com

The grounds are a shadow of the original plans for the Villa. Raphael had originally intended there to be a vast series of terraces running down from the Monte Mario to the banks of the Tiber, but geological instability, a lack of sufficient funds and the 1527 sack of Rome curtailed the scope of the project. More was lost when the estate fell into decline in the eighteenth and nineteenth centuries, while Mussolini appropriated the estate’s hippodrome as the site for the Fascist Stadio Olimpico.

On our recent visit, we entered the estate via a switchback road that gave a glimpse of the east side of the building and the car park that has subsumed one of the original garden terraces, before bringing us to the curved south entrance. Having admired the staggeringly beautiful painted ceilings inside the Villa, we entered the garden terrace adjacent to the loggia. This was green and dramatic, with tall, clipped box parterres, ivy covered walls, a rectangular stone water feature, and The Giants, a pair of sculptures by Bandinelli that stand either side of the gate through to the rustic garden. From the east side of the terrace, there were fine views over the river Tiber below. 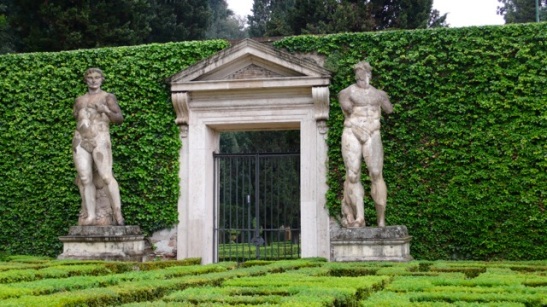 This area contains perhaps the garden’s best known feature, the curious Raphael-designed elephant tomb, which commemorates Annone, an Indian elephant given to the Pope by the King of Portugal in 1514. 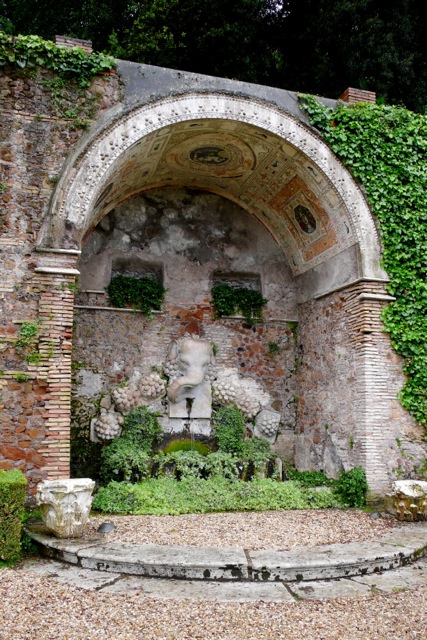 While the parterres are an early twentieth century design, the essential layout of the terrace remains as it was in the time of Margaret of Austria, and the fountain, stone portico and vast plaster figures are all original features.

Through the gate, we entered the rustic garden, which is long and narrow, with simple box-edged beds in grass.

It is clearly a restoration work-in-progress, with stonework being cleaned and rebuilt. There were some simply-planted pots and urns, and the overgrown cypress was being (re-)trained into attractive arched screens. Near the circular end were some peonies in flower among the box. 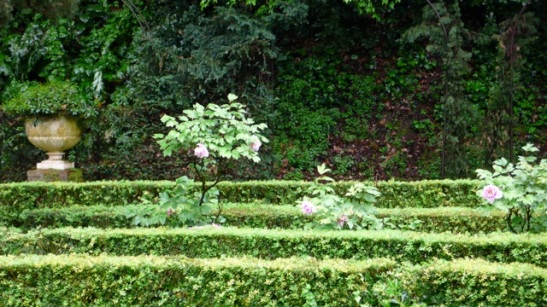 It was lush and pleasant rather than being spectacular, but there was a sense of this part of the garden being gradually recovered and re-used.

At the end of this walk, we were led down a small path to the left, where the source of the gardens’ water emerges from a handsome stone grotto. This little valley among the trees is marked by a charming rectangular pond, and a further, rather overgrown, water feature with six playful stone putti. Often associated with amorous liaisons, these little figures seemed a fitting symbol of the history of the Villa. 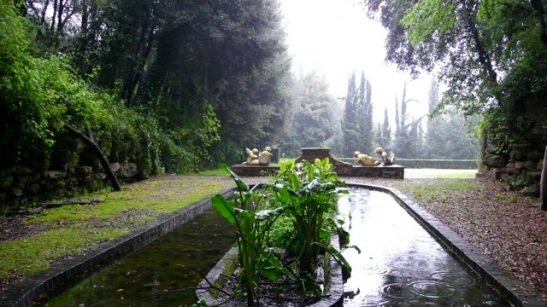 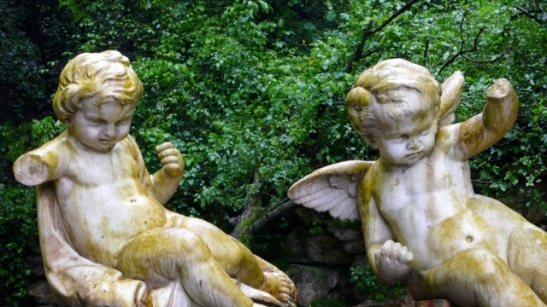 There was much we did not see, and some we did not understand (we speak English and some French; our guide spoke Italian and some Spanish) but we still felt the palpable history and splendour of this place.