In our first few weeks in India, we have seen several examples of ancient Hindu or Mughal architecture surrounded by gardens that turn out to be partly or largely twentieth century British. I’ve already posted about the controversial gardens at Lodi, from where two villages were relocated in the 1930s to allow an English-style park to be installed.

Next up, the sixteenth century Humayun’s Tomb, one of the most beautiful and significant sites in Delhi, and an inspiration for the Taj Mahal. Arranged symmetrically around the elevated marble tomb, its grounds retain the four-square layout of the traditional paradise garden. But the sandstone of the rills and many of the planting choices, although recently restored, apparently owe much to a British intervention in the first decade of the twentieth century, itself intended to correct an earlier British project that had replaced Mughal water features with Victorian circular flower beds.

The red and white marble of Humayun's garden tomb, with the sandstone rills and planting added later by the British

An aerial photograph of Humayun's Tomb, showing the grid layout of the gardens. Image on display at the site.

At the Agra Fort, a World Heritage Site 200km south of Delhi, we learnt that the lawns and planting around and within the stronghold (which was constructed in the sixteenth and seventeenth centuries) were again put in place by the Brits, establishing grass and shrubs where formerly had been paved and carpeted gathering spaces. 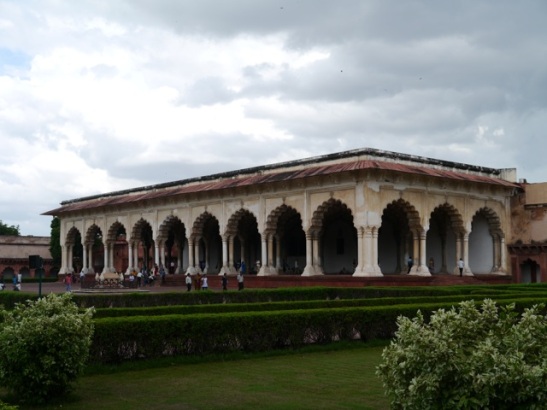 British shrubs and grass at the Agra Fort

The Taj Mahal was also influenced by its time under British management. While the exact layout and planting of its original gardens in the seventeenth century are not known, there are early descriptions of the monument surrounded by a profusion of roses, daffodils and fruit trees. As part of a major conservation programme, the gardens were replanted in 1903 in a more Western style, with lawns and clumps of trees. 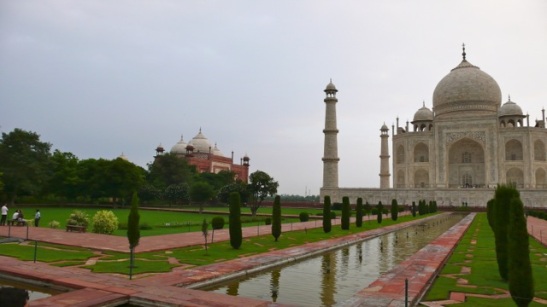 Irregular clumps of trees and lawn adjacent to the Taj Mahal 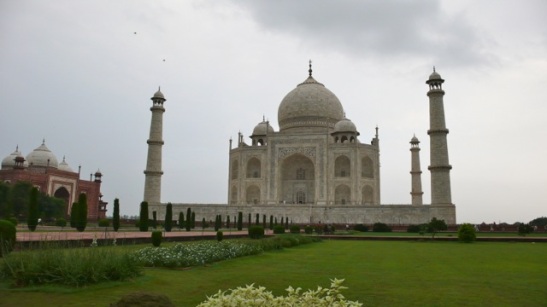 All these horticultural and design changes were part of well-meaning efforts to restore or enhance crumbling historic sites. Some would now argue that much of this work was inappropriate, examples of misguided attempts at restoration by people who did not understand the culture of the country or the history of its landscapes. (It makes me wonder which conservation projects of today will in future years be seen as ill-judged or unwise, introducing incongruous elements or removing historically significant features.)

Yet gardens are always going to change over time. For me, one of their joys is the layers of history that they contain, with designs and planting from different periods jostling and intermingling around the largely static architecture. The British are just one of many influences on Indian landscapes, and there is a certain pleasure in seeing their (our) brief, particular impact.