Last weekend was the national garden festival Rendez-Vous aux Jardins. To be honest, it was a bit of a damp squib in Paris, with only 10 sites taking part, most of them public parks where it was pretty much business as usual. 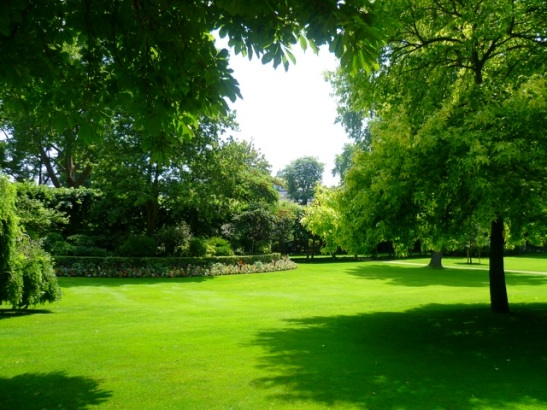 The one treat in the capital was the opening of the private gardens at the early eighteenth century hôtel de Matignon in the seventh arrondissement. These days, Matignon is the home of the French prime minister. The 3ha (7½ acre) grounds, said to be the largest private gardens in the city, are usually only available to the current incumbent, François Fillon, his Welsh wife, and their official guests.

The gardens at Matignon from the 1734 Michel-Etienne Turgot map of Paris. From http://plan.turgot.free.fr

The gardens were originally laid out in the 1720s by Claude Desgots (the great-nephew and heir of André Le Nôtre) as a series of parterres and potagers, with a central axis marked by a double allée of pleached limes (Tillia) and a boundary screen of large trees and shrubs.

The gardens entered a second phase in the nineteenth century, when the southern end became a place for romantic promenades à l’anglaise among exotic flowering trees, including magnolias and Judas trees (Cercis siliquastrum).

In 1905 came their third incarnation, when the property’s then owner, the ambassador of Austria, brought in noted designer Achille Duchêne to renovate the gardens and turn them into a place suitable for entertaining. While preserving many of the old trees, Duchêne created a large tapis vert, a green carpet, near the house, edged by six small bosquets (groves of trees and hedges), with smaller open spaces under the trees to the side.

Today the grounds are presented as a garden of two halves: the winding walk among trees, still described as English in style, and the more open space for entertaining near the house.

During my visit last Saturday, in 30℃ heat, the overwhelming sense was of greenness – dazzling greenness. Literally acres of the gardens consist of lush, bowling green lawn, surrounded by some magnificent ancient trees. 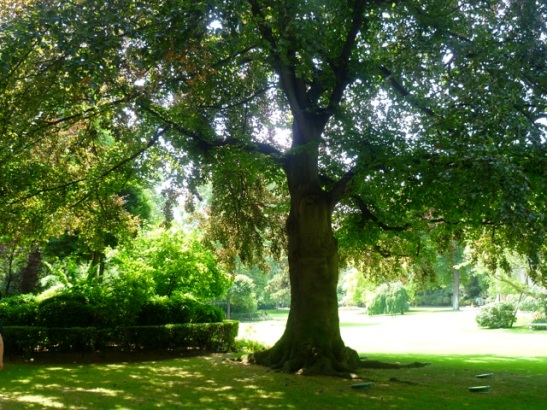 To me the most impressive feature was the pleached lime allée, with its careful planting and clipping to create a false sense of perspective. 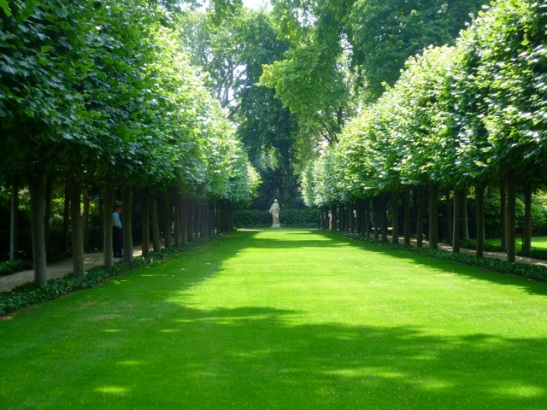 Less interesting were the rather gaudy annuals and tender perennials neatly bedded out in narrow strips around the house and alongside the clipped hedges of the bosquets.

We learnt that much of the gardens are maintained organically, with nematodes and other natural parasites used to control pests, and all the weeds removed from the gravel paths by hand. The lawns, on the other hand, are clearly treated to keep them so fine and completely weed-free, and are regularly and copiously watered (we had had no rain for about a month on the day I took these photographs). 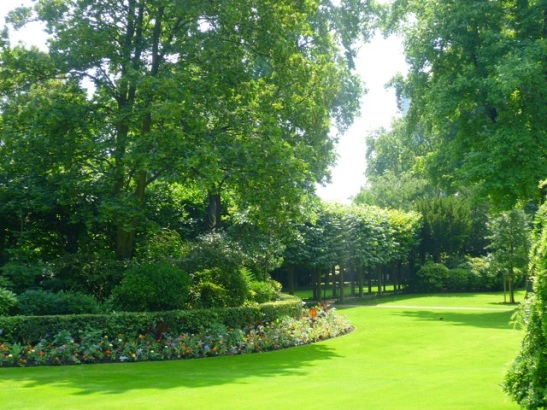 Traditionally prime ministers plant a specimen tree in the gardens on their arrival at Matignon. One French visitor was speculating on the meaning of Lionel Jospin’s 1997 choice of Ulmus ‘Wanoux.’ To me, more curious was the planting beyond the allée of a frothy cream Chinese dogwood (Cornus controversa ‘Variegata’) by the dependable, statesmanlike current prime minister.

Matignon is not, for me, a great garden. It seems too tentative, too unsure of its own character: is it French or English, conventional or organic, geometric or asymmetrical, a flower garden or an arboretum, a place with three historical periods or two geographical halves?

But it was still a treat to be allowed inside its usually closed portals.