Snotty gogs and tithe maps: the garden at Veddw

Veddw is a modern garden, laid out among the gentle hills of the Welsh borders. It has an unusual genesis: not a plantswoman’s garden, not a gardener’s garden. Instead, its creator, Anne Wareham, was driven by a fascination with the garden as art form. With her photographer husband Charles Hawes, Anne has spent 25 years developing Veddw from meadowland.

We visited last June and found lots of things easy to enjoy and admire.

The garden is full of big confident sweeps of plants and patterns of hedging. This is not a timid place, fiddling around in details. It makes bold marks on the landscape. 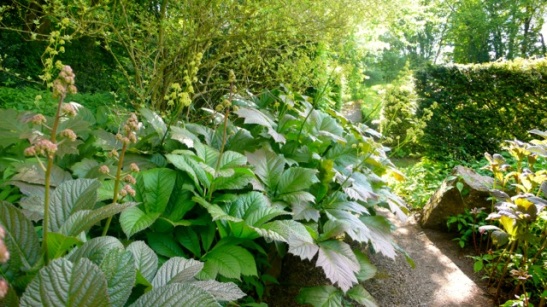 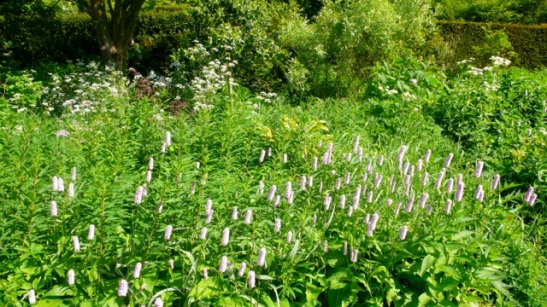 Despite its confidence, Veddw is not a garden with airs and graces – you take it as you find it, from the home-made sign on the door to Anne (maybe) offering builders’ tea, no cake, and a gossip after the visit. It is full of contrasts, between wild flowers and clipped shrubs, light and shade, open vistas and secret pathways. 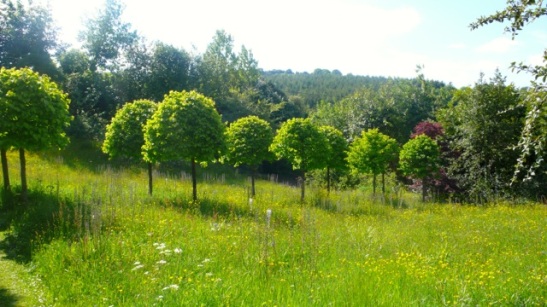 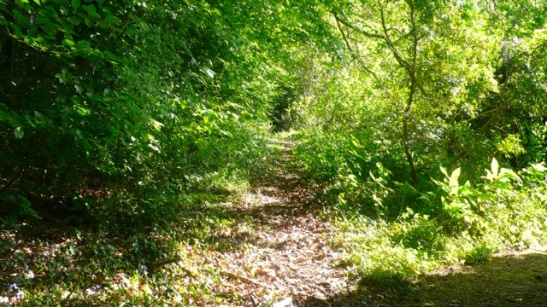 There are words in the garden – a quirky, modern use of inscriptions – from the apt Wordsworth quote on a bench: 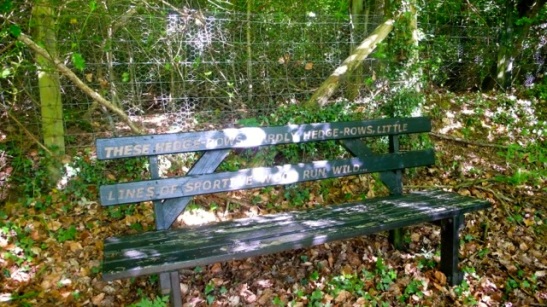 to lists of common plant names in the cornfield garden, stamped in gold lettering on wooden railings. Here I learnt the delightful phrase “snotty gogs” and discovered that it is a child’s term for yew berries.

The garden is not seen as settled or finished, but is constantly undergoing review and refinement. Since we were there, Anne has announced plans to chop down the trees at the end of this pathway and replace them with a bench as a better focal point.

Although the garden’s most famous feature, a reflective pool, left me rather cold (feeling too self-conscious, too much of a stage-set): 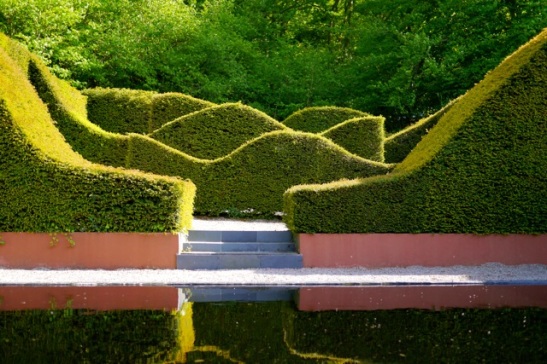 there is a delightful smaller stone pond near the house. It is firmly rectangular and makes no pretence at being natural but, surrounded by mossy stones and seemingly self-seeded alpine flowers, it manages somehow to look like it has always been there.

What I admired most about Veddw was how the garden sat in its time and place: the way the curved hedges echo the rolling hills beyond the garden:

the retention of ancient meadow:

the little tombstones in the wild garden with their inscriptions of lost local names: 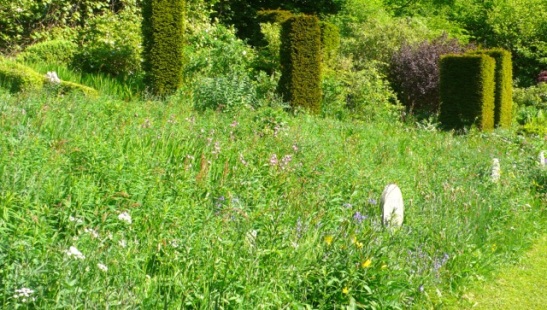 the casually displayed collection of objects found when the cottage was partially rebuilt – allowing us to imagine the former life of the site.

Anne invites visitors to suggest one improvement. I immediately and erroneously plumped for an area in the north garden, full of contrasting grey cardoon and purple heuchera and cotinus. I found it leery and brash; she clearly does not. It did not need improvement as such –  it just didn’t appeal to me (although I know Anne scoffs at the idea that we should explain away critical comments as just a question of different tastes). 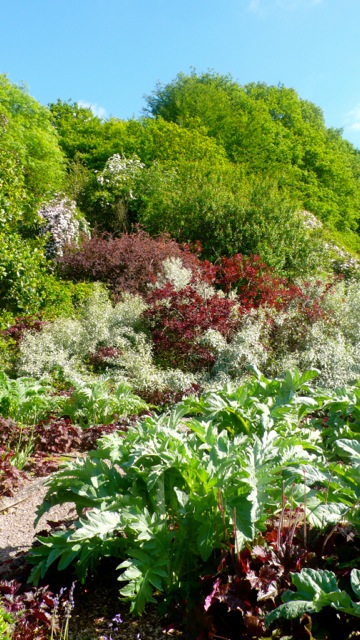 On reflection I think a better suggestion for improvement would have been the grasses parterre (in the background of the photo below). I really wanted to like this area: low hedges are laid out in the pattern of the 1841 local tithe map, and the resulting ‘fields’ are planted with ornamental grasses. It seems a great idea, another novel way of referencing the history of the site. But I found it impossible to understand on the ground. It just looked puzzling and slightly scruffy, like it was trying to tell you something but you couldn’t work out what.

No easy solution springs to mind but, given the use of quirky inscriptions elsewhere, I wondered if the tithe map could be more explicit? Or the area made more aesthetically pleasing in its own right, so that knowledge of the map as its inspiration becomes just a bonus?

The garden is a joy, always changing and growing, and worth repeated visits. Just don’t simper to the formidable Anne that you think it all vaguely “lovely” – and don’t expect roses or cake!

9 comments on “Snotty gogs and tithe maps: the garden at Veddw”

This entry was posted on March 26, 2014 by landscapelover in Gardens, Modern design, UK and tagged Anne Wareham, Charles Hawes, Veddw.