My previous post featured a 19th century Moroccan palace of small rooms and many courtyards, with intricate patterned surfaces, scented plants, trickling fountains and a sense of intimate ease. This post now describes two very different gardens in the same city – one a vast ruin and the other a modern icon.

A drawing of the Badi palace in its heyday, by Adriaen Matham, 1640.

The Badi palace was a sixteenth century extravaganza, built by a Moroccan king in Italian marble and gold. With its vast and sumptuous design, and reputation for lavish feasts and debauchery, it barely survived its creator, being soon destroyed by a subsequent ruler. 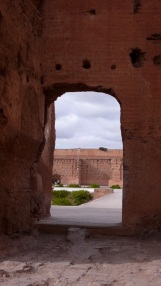 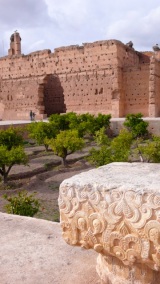 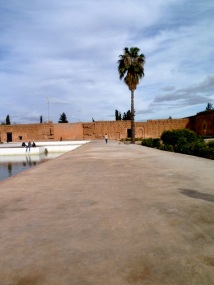 Today it remains in the heart of Marrakech, a ruin shored up by the Culture Ministry – and an Ozymandian warning of the dangers of pride and excess. It is difficult to appreciate how splendid it once was, but the ruins give a sense of its vastness, with a main courtyard measuring almost 1.5 hectares (about 3.7 acres), centred around a monumental rectangular pool and four sunken gardens of roses and orange trees.

Where once were huge fountains and gold-topped pavilions, orchards and silver sculptures, now there are just the remnants of walls, and glimpses of old tiled paths and carved stonework amid the rubble. Storks nest on the crumbling ramparts. 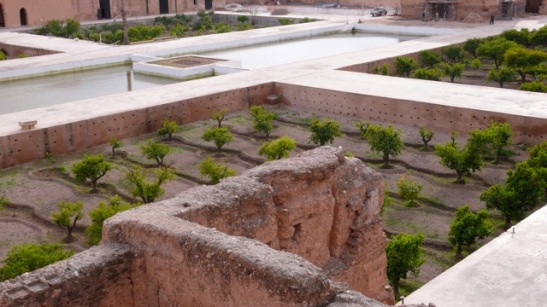 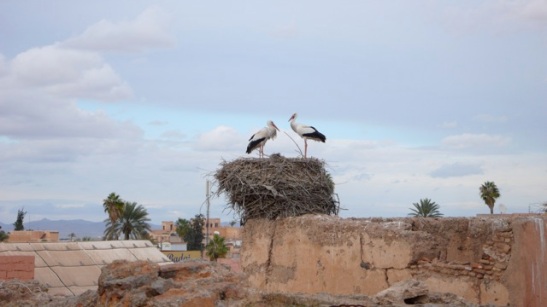 In contrast, the Majorelle gardens in the new town are meticulously maintained. Created in the 1930s, the gardens are probably now the best known in Marrakech. 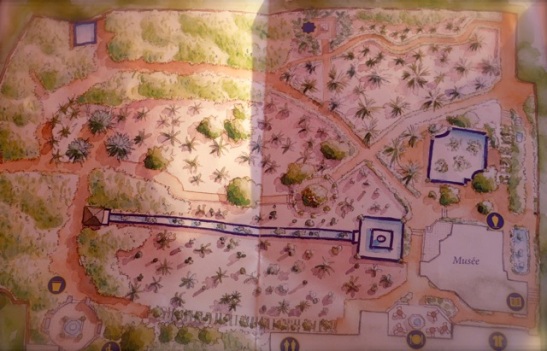 Plan of Majorelle gardens, from leaflet available at site.

The central features – an art deco studio, fountain, and pavilion, joined together by a rill – are famously cobalt blue. Around them, winding paths lead you through gardens of bamboo, palms and cactus. 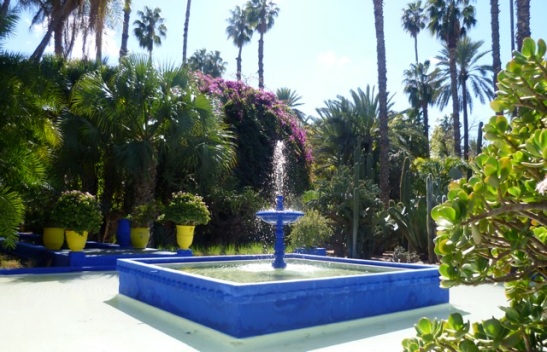 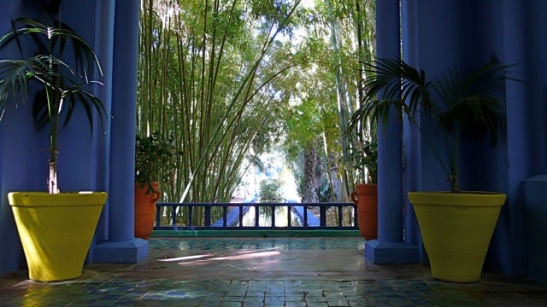 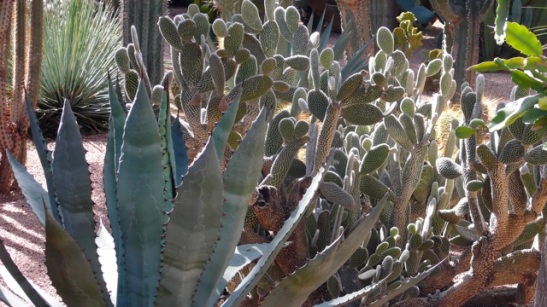 Created by painter Jacques Majorelle, and restored in the 1980s by fashion designer Yves Saint Laurent, the gardens are a visual feast, with coloured pots of succulents, water features, architectural planting and carefully crafted views.

These gardens are far from typically Moroccan, but they both have their own, very different, magic.

Postscript: I am entering the image above in Gardening Gone Wild’s April photo competition. The theme is matching the right light to the right subject, and this seems to me a fun example of an image that actually thrives in the dazzlingly bright noonday sun. As a painter, Jacques Majorelle understood how to use intense colours, spiky plants, and dramatic shadows to create a garden perfectly suited to the harsh North African light. I hope my image captures something of his theatrical design. It was certainly a change for me from photographing gardens in the soft light of northern Europe.

This entry was posted on February 25, 2011 by landscapelover in Gardens, Morocco and tagged Badi palace, Majorelle Gardens, Marrakech.