Landscapelover is delighted to welcome fellow blogger Lula Alvarez (aka Camer@Work) from On Botanical Photography as a guest contributor for this post. We have both been visiting and photographing the green walls—or vertical gardens—of master botanist Patrick Blanc.

Vertical gardens are everywhere these days. Seen as a dramatic statement of green credentials, they are trumpeted as increasing biodiversity, improving air quality, reducing energy consumption (as they provide building insulation), absorbing urban noise, and helping manage storm water runoff. Some analysis is going on (for example, here and here) which seems to confirm many of these claims. Paris is one of several cities that has included vertical gardens in its plans for combatting climate change.

Green walls are created in a number of ways. Most obviously, climbing plants are placed at the foot of a wall and encouraged to grow up. Alternatively, plants start at the top and cascade down. Lawrence Halprin, for instance, used this top-down approach to smother concrete walls at Freeway Park in Seattle. 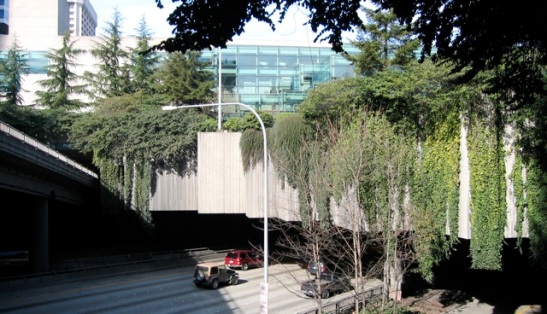 We are lucky in Paris to have Patrick Blanc, one of the leading experts on planted walls, or murs végétals. As a botanist, Blanc realised that plants in the wild frequently do not need soil to grow, but can thrive on cliff faces, rocks and the trunks of other plants. So he devised a novel way of growing plants on walls. No soil at all is involved: his designs consist of a layer of felt stapled to a waterproof PVC sheet, which in turn is attached to a metal frame fitted against the wall. That’s it. The plants are established as seeds or cuttings on the felt, and are automatically watered (and fed) from above. He now installs such vertical gardens all over the world, but the French capital has the greatest number of his creations.

Lula and I have been visiting a number of Blanc’s gardens. Perhaps the best known is the 2005 green wall at the musée du Quai Branly in Paris. It is much photographed, with shots often also including a glimpse of the nearby Eiffel Tower. 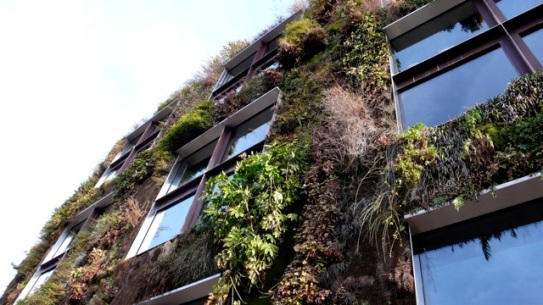 Similar in style is a building on rue Belliard in Brussels. Installed in 2009 for Stam-Europe (a property investment firm), Blanc’s creation covers a windowed façade on a busy street. But Lula says that, in contrast to the lushness of the Paris example, it has been poorly maintained and some of the plants have died. The building is currently unoccupied, and advertised for sale or rent. 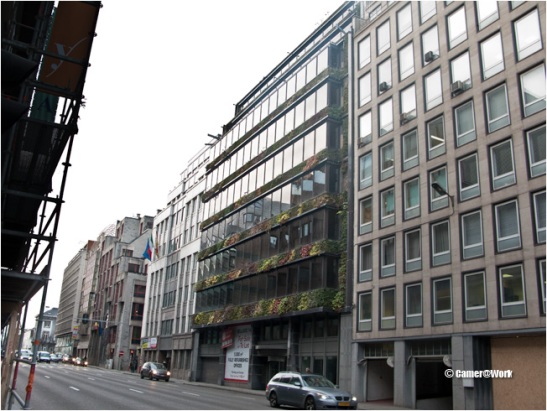 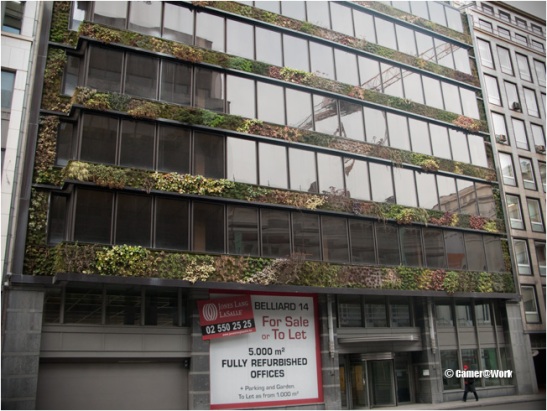 Similar problems have occurred on the Parliament building in Brussels, where Lula reports that she was not allowed to take photos of Blanc’s 2006 installation because the wall is currently in such a bad condition. Restoration work is apparently underway, but it will not be fit to be photographed again until the summer.

Patrick Blanc walls also appear as small squares on the front of department stores, aiming to catch the eye of the passer-by and to suggest the shop’s eco-friendliness. One example is at BHV Homme, installed in 2007, tucked down a side street in Paris’s 4th arrondissement. It contains some surprising plants, including a few tough little mahonia aquifolium.

Lula found a similar 2008 Blanc garden on the front of Berlin’s Galeries Lafayette, which is housed in a stunning building designed by Jean Nouvel. The first photograph below is from last summer, and shows that some of the plants had died. But by November 2010, in the second photograph, the wall had been partially replanted and was again thriving. 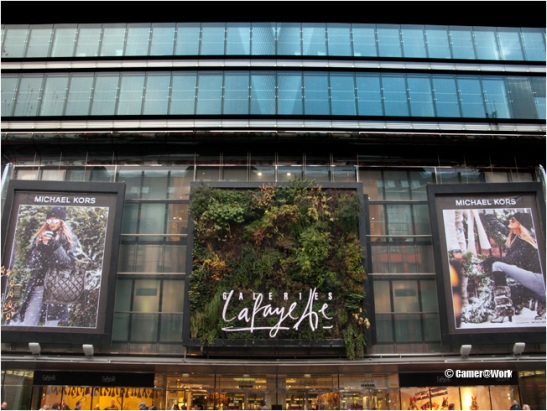 Blanc started his career creating vertical gardens inside buildings, only later moving on to external sites, and he still installs interior green walls for some clients. The smallest example I have seen is a free-standing display, created in 2006 inside the Weleda store on Paris’s Avenue Franklin Roosevelt, designed no doubt to promote the store’s green credentials.

Such internal walls are less accessible to the casual passer-by — and also to the writers of this post. Lula managed to snap a photo from the street of the vertical garden inside Club Med premises on Avenue Louise in Brussels, after being told prior permission was needed to photograph inside. Her photograph shows that the long, low wall Blanc created in 2007 still looks lush and healthy. 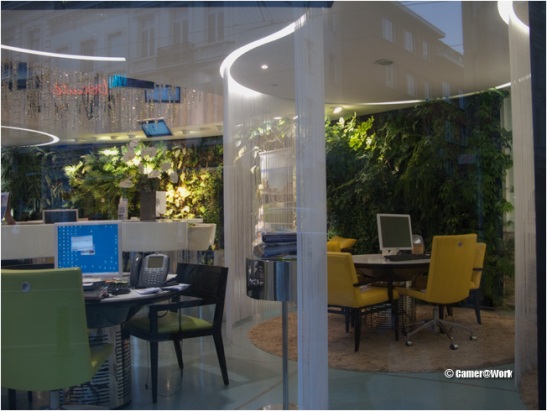 The Pershing Hall boutique hotel, just off the Champs Elysées, has another internal Blanc wall, installed in 2001. Luckily I was allowed to photograph it last month. It theatrically forms one whole side of the small dining room, and then extends up beyond the glass ceiling into an atrium, around which are arranged the hotel’s bedrooms.

Sadly, a series of dramatic green columns, installed by Blanc in 2005 in the stairwells of an underground car park at place des Ternes in the 17th arrondissement of Paris, have recently been abandoned. The water and artificial lights were turned off, and the plants have withered and died in the dry, dark conditions. They remain in place, now husk-like, a silent recrimination. 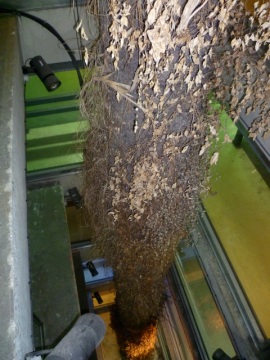 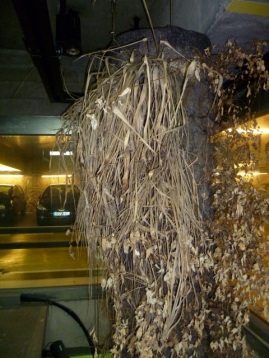 The most striking example I have seen of Blanc’s work was at the Caixa Forum post-modern art museum in Madrid. This converted warehouse, with its rusty steel façade, provides a stunning contrast with Blanc’s 2007 creation, installed on the wall of a neighbouring building.

Like all Blanc’s designs, the fifteen thousand plants for Caixa Forum were carefully chosen to suit the local climate, and have been arranged in painterly patterns to echo the contents of the museum.

Both Lula and I visited in February, as the plants were just coming into growth; later in the season, the wall is gorgeously lush, almost shaggy.

An even bigger example of Blanc’s work runs along one side of the Passage Delanos, a shortcut between two Paris train stations, Gare de l’Est and Gare du Nord. The 1,400m² vertical garden was installed in 2008 as part of the SNCF refurbishment of the area, and it transformed a dark alleyway into an exuberant green space in the city.

In late summer, there are sedums and other plants in flower on the wall, but even in early spring it has ferns, heucheras, grasses and helxine (baby’s tears), in broad swathes of yellow, light and dark green, brown and pinkish purple.

It is hard not to love these lush green creations. But is there a downside? Well, clearly—even from these few examples—like any garden, green walls will deteriorate if not properly maintained.

There are also concerns that vertical gardens may become a way of justifying denser development: some planning departments are already offering more building space to firms prepared to use green practices. It’s known as a “density incentive.” Let’s just hope that these delightful planted walls continue to be additional green space, and don’t become instead a vertical alternative to traditional parks.