The death of former UK prime minister Margaret Thatcher last week has led her supporters to cast around for ways to commemorate her. Ideas include a statue in some central London spot, perhaps outside the Houses of Parliament, or on the empty fourth plinth at Trafalgar Square. This would seem to me a bad idea, not just because Thatcher remains a highly divisive figure whose life many would not want to see celebrated, but because Trafalgar Square’s empty plinth already has a role.

The plinth was originally destined to display an equestrian statue, to accompany figures of Lord Nelson, two generals and a king, but it was never installed. So from 2005, the plinth has exhibited a series of specially commissioned artworks in a splendid scheme run by the Greater London Authority. The idea is both to make Trafalgar Square a vibrant public space, but also to “encourage debate about the place and value of public art.” 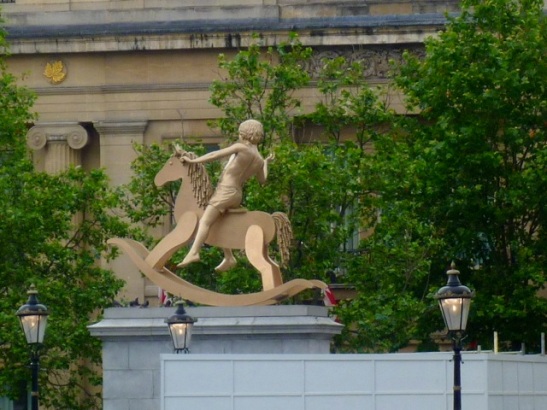 It has been a great success, allowing the display of (so far) five artworks, all different, some controversial. None of them would have been chosen in a soulless, lowest-common-denominator competition for a single, permanent piece. I don’t much care for the current display (a bronze sculpture of a boy on a rocking horse by Elmgreen & Dragset) but know that it is only temporary, and that the next one may be more to my taste (well, unless it does turn out to be of Margaret Thatcher…).

Here in New Delhi, we have our own empty plinth in the heart of the city: on the great ceremonial procession known today as Rajpath, and built by the British even as their control over their Indian Empire was waning. In 1936, Edwin Lutyens designed a white marble memorial to the late King-Emperor George V, to be erected close to the war memorial known as India Gate. 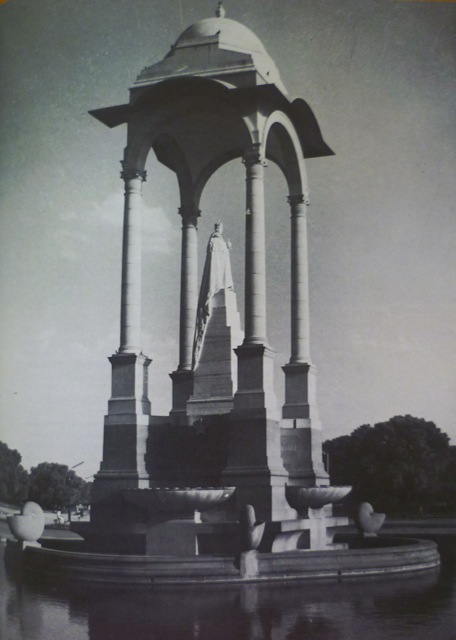 The memorial to George V, complete with statue; photograph from Irving’s Indian Summer.

After Independence of course, the Indians did not relish having a British monarch lording it over this great thoroughfare and eventually his statue was removed. Since the 1960s it has sat rather glumly in a park to the north of the city, once the site of major British pomp and ceremonies, but now little known.

The statue has gone, but Delhi’s plinth remains, sheltered under its fine baldachin or canopy, but resolutely empty. 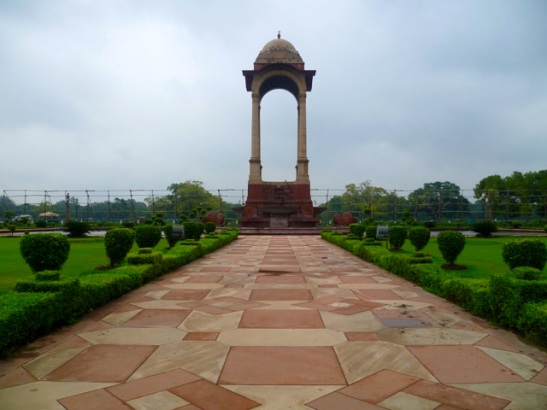 There have long been arguments about what or who might replace old George on the plinth, but even obvious contenders such as Mahatma Gandhi have proved too controversial for plans to proceed. It has often struck me that Delhi might follow the example of Trafalgar Square and invite the best of Indian artists to produce a rolling programme of temporary installations for this most prominent spot. It would be a great shame if London’s novel example, rather than being replicated, were now to be lost.

This entry was posted on April 16, 2013 by landscapelover in Cemeteries and monuments, India, UK and tagged George V memorial, Margaret Thatcher, Trafalgar Square.