It can be hard to grasp the shift in France from the great classical, geometric gardens of Le Nôtre and his followers to the so-called anglo-chinois style which swept the country in the years leading up to the French revolution. It is possible to write at length and with some pretension (as I have done) about Republicanism and Romanticism, Chambers and Rousseau, to try and tease out the evolution from one to the other.

But to get a real sense of the shift, you can do no better than browse Jardins anglo-chinois à la mode, a wonderful collection of almost 500 detailed drawings published in the 1770s and 80s by George Le Rouge. Most of the featured gardens are French, but there are a good few from England, Prussia and Germany, as well as dozens of representations of Chinese gardens.

What the drawings show so well is how the great structural French gardens were gradually influenced by the English landscape movement, with its naturalistic layouts and follies, including classical temples and Gothic buildings. Overlaid on this was the craze for Chinese-inspired gardens, which meant the introduction of rocky hills and pagodas and walks that offered contrasting experiences and sensations. Stated baldly like that, in a couple of sentences, the shift sounds clumsy and improbable. Yet the drawings capture it beautifully.

The great geometric parc de Roissy (north of Paris) with small sections given over to the quirky French take on naturalistic English gardens. From volume 3 of Jardins anglo-chinois à la mode. 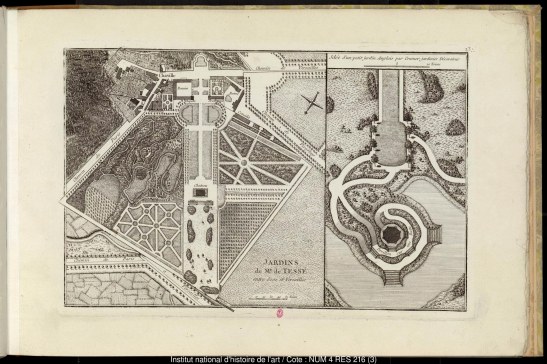 The classical gardens at Chaville, near Versailles, showing (top left quadrant) how its new owner Mme de Tessé was introducing the distinctive anglo-chinois style among the old geometric allées and vistas. From volume 3 of Jardins anglo-chinois à la mode. 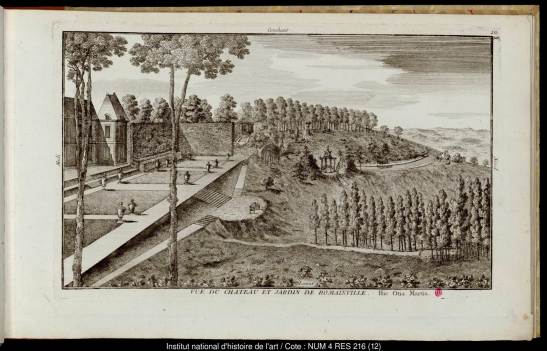 The gardens at the château de Romainville, east of Paris, with the geometric terrace and classical patte d’oie viewing point, overlooking a craggy park of irregular paths and waterways with a Chinese pavilion as a focal point. From volume 12 of Jardins anglo-chinois à la mode.

The drawings are all available on line in very high resolution, thanks to a digitisation project by the Institut National d’Histoire de l’Art. They seem to be in no chronological or geographical order (although there is an index of sorts at the end of volume 12), with some gardens (such as Chambers’ enormously influential work at Kew) appearing randomly at various points in the folders. New gardens created in the anglo-chinois style also feature, such Ermenonville, Monceau and a whole volume on the Désert de Retz. 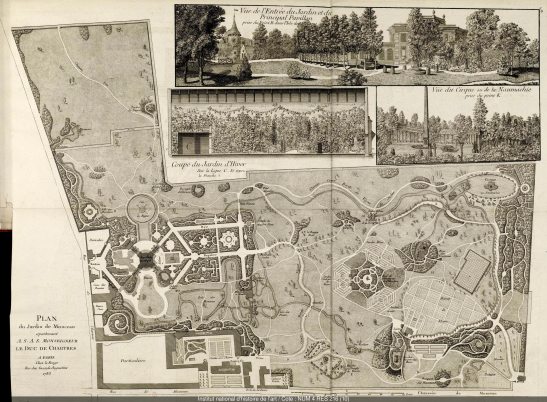 Some of the structures and features in the jardin (now parc) de Monceau in Paris, created in the anglo-chinois style in the 1770s.

Volume seven contains a fascinating list of trees and other woody plants categorised by size, which are recommended for this “modern” style of garden.  Many are exotic species but considered hardy in the French climate. The introduction to the list stresses that, unlike the uniform specimens used for tree-lined allées in classical gardens, trees in anglo-chinois gardens should be planted in groups of varied size, form, colour and leaf-shape. The recommended species range from pines, poplars and walnuts to blackberries and clematis.

For those interested in garden structures, this collection is also a great source of detailed architectural drawings of temples, towers, pavilions, kiosks and pagodas. 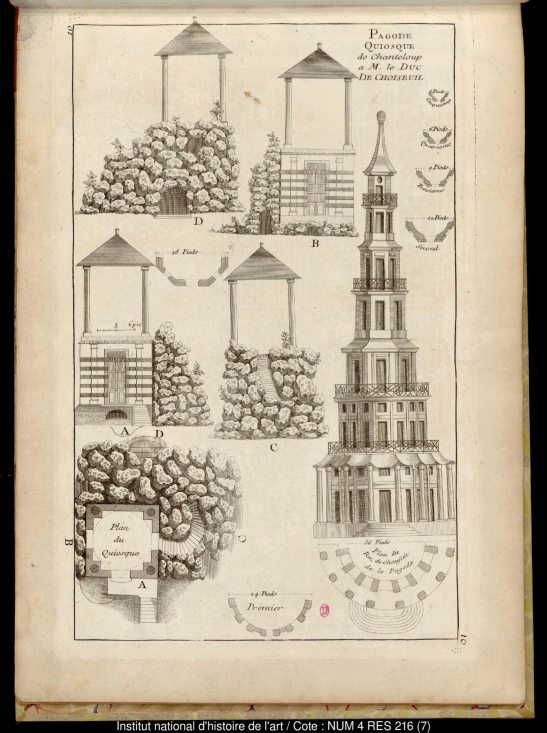 Plan for a kiosk among rocks and the (still extant) 44-metre high Chinese pagoda installed by the duc de Choiseuil at his garden in Chantaloup in the Loire Valley. From volume 12 of Jardins anglo-chinois à la mode.

Many gardens drawn by Le Rouge still exist and it would be fascinating to examine how many of the anglo-chinois features remain in place today. Some of these gardens are no more (the parc de Roissy for instance is I believe lost under Charles de Gaulle airport), but are preserved here in wonderful detail at a particular point in time.