It may be the only time that historic garden conservation has been compared to a flaky French pastry. But use of the term mille-feuille was not the only unusual thing about the 1990 plans by Bernard Lassus for the Jardin des Tuileries, that magnificent processional space between the Louvre and the Place de la Concorde in the middle of Paris.

Originally created as riverside pleasure grounds for a palace, the gardens have over their 450-year history been the playground for monarchs and emperors, the site of many important events in French history, and a reflection of changing fashions and trends in landscape design.

In the 1980s, with the implementation of French President Mitterrand’s grand projets, the gardens became part of an extended axis through the city. A controversial glass pyramid in the Louvre courtyard created a new focal point at their eastern edge; beyond the western edge, the axis that had continued up the Champs Elysées to the Arc de Triomphe was extended to the vast new Arche de la Défense in the city’s business district. At this time, the French government decided to renew the gardens themselves, and invited nine firms to put forward proposals.

The shadow of Le Nôtre’s work in the Tuileries clearly loomed over the nine designers, and encouraged rather cautious, reverential proposals. Most of them aimed to conserve as much as possible of the existing gardens, and focused on preservation work such as repairing statues and restoring planting.

The proposal from Bernard Lassus stood out. An experimental artist and theorist, Lassus was known for his pioneering ideas on landscape design. He had already won two competitions to create public gardens that celebrated the history of their settings in novel ways and, in 1984, had proposed a remarkable—some said unbuildable—plan for a vertical garden at the new Parc de la Villette in Paris.

His proposal for the Jardin des Tuileries was thoughtful, subtle and utterly radical. With his fascination for spatial depth as a metaphor for the passing of time, Lassus was inspired by the way that the new Louvre pyramid had gone underground, slicing its way through the archaeology of the ancient site, to create a new, subterranean entrance to the museum. In doing so, it had revealed the densely packed history stored there. Lassus proposed the same approach for the gardens, cutting away the historic layers to create a mythic archaeology that exposed the main design periods for the Tuileries. Still rectilinear, the site would become deep, using its strata or layers to reveal and reinvent the garden’s history, maintaining and celebrating its many memories and associations.

Views of the Lassus plans for the Tuileries. From http://www.bernard-lassus.com

Details of the Lassus plan

Five layers of the Lassus plan.

The proposal split the garden horizontally into areas and vertically into strata, representing the five main eras in the history of the gardens. The oldest, and lowest, layer would correspond to the walled garden created from the 1560s by Catherine de’ Medici, widow of Henry II, which was a place of variety and surprise. Designed in an Italian style, this garden had been divided into regular compartments, with parterres, a maze, groups of fruit trees, lawns and vineyards. This is shown as dark grey on the Lassus plan, and would be reconstructed and, where necessary, reinvented 80 centimetres below the current surface of the gardens.

The jardin des Tuileries in 1573, during a ball held by Catherine de’ Medici. From one of the so-called Valois Tapestries; image from wikipedia.

Visitors could then step up to the next layer (the dark red area on the plan). This would be a box parterre and large fountain, dating from around the turn of the seventeenth century, and said to be designed by Claude Mollet, gardener to Henry IV and one of a great dynasty of French gardeners.

Up another level, the middle stratum (lighter red) was to be the celebrated work of André Le Nôtre who, from 1664, redesigned the gardens in a monumental style. They contained the grand central axis for which the gardens are now perhaps best known, marked by fountains and large ponds at either end. 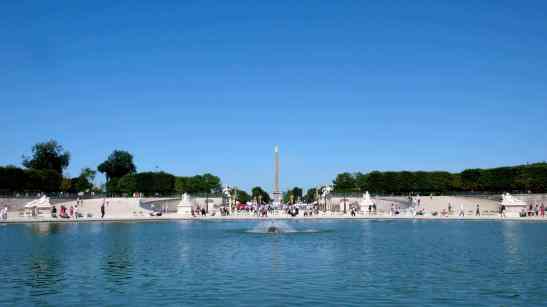 The hexagonal pond and monumental curved walkways created by Le Nôtre at the western end of the gardens.

The fourth layer in Lassus’ proposal (shown in yellow on the plan) consisted of the nineteenth-century additions to the gardens, including the twin pavilions at the western edge, and the jardin réservé (private garden), with its water features, flower beds and statues, created for the restored monarch Louis-Philippe, and subsequently enlarged and much enjoyed by Emperor Napoleon III.

The Orangerie, one of a pair of classically styled pavilions added to the gardens by Napoleon III in the mid-nineteenth century.

Finally, Lassus proposed a new, fifth stratum of contemporary design. Just as the Louvre pyramid and the Arche de la Défense created a new axial geometry for the city, Lassus wanted the gardens to include a distinctive contribution of our own time. So, at a level some 170 centimetres above the current surface, he proposed a modern jardin d’eau or water garden (shown as pale blue on the plan). The new reflecting pools and cascades would appear to bring the Seine, running along the southern edge, into the gardens, as well as making a link with the existing pools and the new fountains in the Louvre courtyard.

Different surfaces would mark the different periods in the gardens’ history: for the Medicis garden there would be terracotta and grass; for Le Nôtre, compacted sand; for the nineteenth century layers, gravel. These changes underfoot would set up a rhythm for visitors to help them discover what was being revealed. This would be further supported by glass engravings showing the full garden plans of each period, and stone inscriptions marking the site of important events.

Thus, the Lassus proposal was for a layered landscape, with a mix of styles and histories on show; a veritable mille-feuille. Rather than giving one age precedence over another, his approach recognised the multiple significance of the Tuileries; they were, as he described them, “the sum of the thickness of places and events” and provided the opportunity to create “a space exploring time.” Freeing the gardens from what might be seen as the too imposing precedent of Le Nôtre also allowed new opportunities for people’s interaction with the landscape, which might include travelling shows and temporary works by modern-day artists.

The Lassus proposal was not successful in the competition. Instead, the French Government picked the team of Louis Benech and Pascal Cribier, who essentially spruced up the existing gardens, with modern watering systems, restored garden features and new perennial plantings. 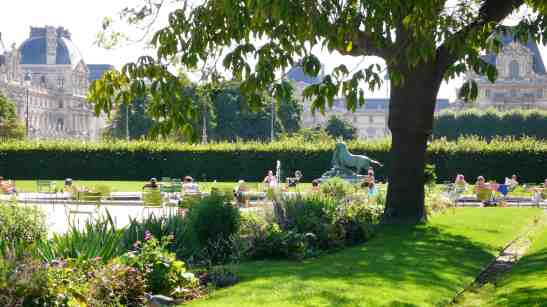 Mixed perennial beds today on the site of the nineteenth century jardin réservé.

Belgian designer Jacques Wirtz was invited to rework the Jardins du Carrousel at the far eastern end of the Tuileries (which had not formed part of the Lassus plans), with a design of radiating yew hedges, today widely viewed as a failure.

There are those who might criticise Lassus’ proposals as a Disney-esque version of the gardens, deliberately (and wrongly) giving the impression that each stratum continued under the subsequent layers, and arguably creating a false sense of history by combining features that never existed together historically.

Yet his plans would have been a bold and thought-provoking way of treating these gardens. Landscape historian John Dixon-Hunt has argued that the Louvre pyramid forced us to see the historic space around it differently, and required an equally challenging garden to complete the design: something as demanding, as deep, as exciting. But, in the end, France’s courage seems to have run out with the pyramid, and the iconoclastic Lassus proposals for the Jardins des Tuileries will remain forever unrealised.

A version of this article originally appeared in Gardens and People, as part of a series I wrote on ‘Gardens That Were Never Built.’

8 comments on “Historic restoration as mille-feuille”

This entry was posted on January 27, 2014 by landscapelover in Gardens, History, Paris and tagged Bernard Lassus, Jardin des Tuileries.