That was the question put to me last week by the head gardener in charge of one of Le Nôtre’s most beautiful designs. He had read lots of experts on the subject, and still couldn’t get a real sense of how far flowers embellished those wonderful scrolled patterns of clipped box that are such an important part of classical French garden design. (Le Nôtre himself is said to have tired of designing them, and thought them only valued by the nursemaids who, tied all day to the babies in their care, would look longingly out of their upper storey windows onto the gardens below.) 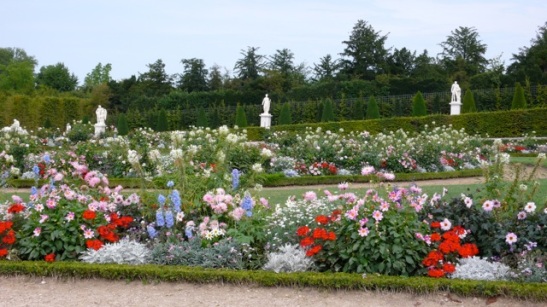 One of the flower-filled Latona parterres in Le Nôtre’s gardens at Versailles, photographed in 2008.

View of a Le Nôtre parterre from an upper window of the chateau of Vaux le Vicomte, photographed in 2011.

Sadly Le Nôtre wrote very little about his garden designs, and images from the time usually show grand sweeps of the vast grounds, rather than plant details; and in any event, some 17th century engravings are famously fanciful and utterly unreliable for the garden historian. 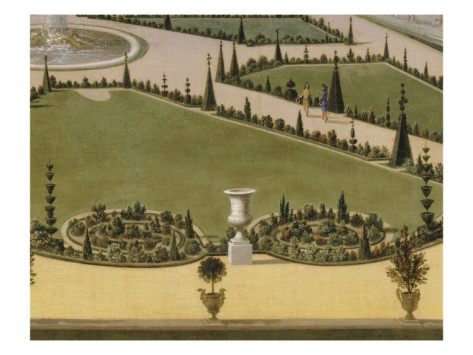 Detail from a 1688 image by Etienne Allegrain of the parterre du nord at Versailles (above), filled with grass and edged with clipped shrubs, narrow paths and stone vases; the same landscape today (below), with more substantial box hedges and flowers.

So both the head gardener and I spent time reading and re-reading Antoine Joseph Dezallier d’Argenville, who in 1709 produced a book that codified Le Nôtre’s style – although one source says rather sniffily that he did so “without always fully understanding it.”

The book has a whole chapter on parterres and plates-bandes (those narrow decorative strips around parterres, lawns or other features). Yet it does not help answer the question: yes, the chapter carefully categorises and describes four different type of parterre, and has some gorgeous drawings of the various styles. And it talks of the different materials that could be laid out between the low box hedges, from coloured sand, clinker and grass to dark earth, clipped evergreen shrubs, and porcelain vases. But the book also spends much time celebrating the variety of decorative possibilities that seasonal flowers could bring to parterres, and encourages its readers to replant three times every year, so that each Spring, Summer and Autumn the garden would take on a different aspect as a result of the style and colours of the flowering plants chosen.

Other sources are similarly unclear on how widespread was the use of flowers and, based on the lack of definitive information, some modern experts (such as Franklin Hamilton Hazlehurst, Tom Turner and Jan Woudstra) believe that most 17th century parterres would have been patterned sand or gravel, with flowers confined to the helpfully titled parterres de fleurs; while others (Michel Baridon, Elizabeth Hyde) describe all or most of Le Nôtre’s parterres and plates-bandes as highly floriferous. 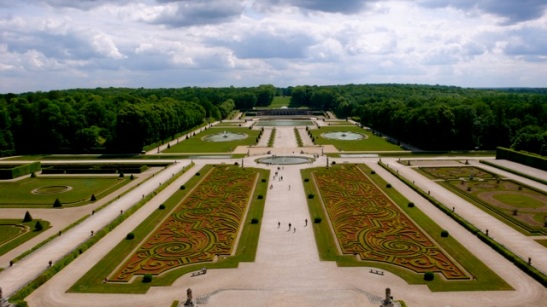 Two parterres de broderie at Le Nôtre’s Vaux le Vicomte photographed last year, with patterns of red and grey gravel separated by box hedging, and the parterre de fleurs to the right, awaiting planting with summer bedding (above); below is the same view from Silvestre’s 1660s engraving.

And, in any event, in the intervening three hundred years, fashions have come and gone and parterres that may once have had flowers are now simple grass and gravel, and those that were probably plain are sometimes highly floriferous. 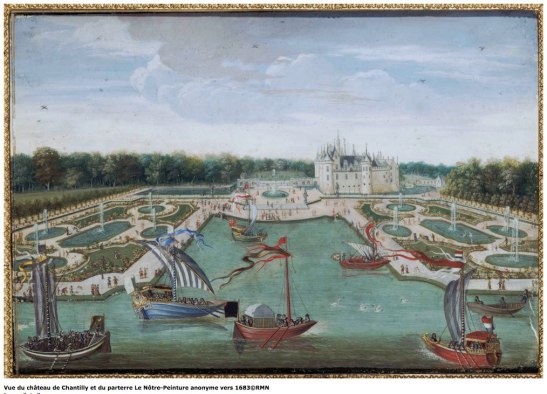 Anonymous 1683 painting of Le Nôtre’s water parterre at Chantilly (above), seemingly edged with flowers; and (below) the same parterre today, with simple paths and grass. Both images from http://www.domainedechantilly.com/

So I had to confirm the head gardener’s suspicions that there simply was no clear answer to the question about the floweriness of Le Nôtre’s parterres. You pays your money, as I wish my French had been good enough to say, and you takes your choice.

10 comments on “Flowers or gravel?”