Most people think about climate change with either skepticism or despair. In a new campaign, the mairie de Paris is trying to introduce a third response: optimism. 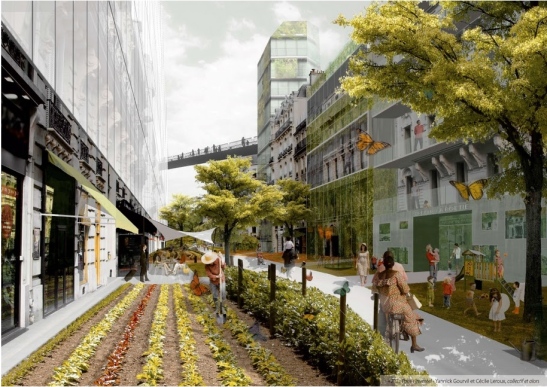 A group of architects, collectif et alors, has imagined how Paris would respond to a rise in temperatures of 2 degrees. The results, presented as twenty postcards, show how courage and investment could transform the city into a slower, calmer, greener place. An old canal near Bastille is exposed again after years of being diverted underground. The walls, roofs and passageways of tower blocks in the 13th are thickly planted with greenery. Private cars have vanished (a common theme in most plans by mayor Bernard Delanöe) to be replaced by tramways and barges, which bring deliveries to the grands magasins. Vegetable gardens spring up in the fertile soil currently buried under the concrete of rue la Boëtie in the 8th (recalling the royal nurseries that once were cultivated there). Green, shady spaces welcome pedestrians and cyclists around the Hotel de Ville. Everywhere from the Seine to the Tour Montparnasse is redesigned to provide renewable energy for the city’s inhabitants.

As my husband remarked, the images are so deliberately Utopian that you almost want the climate to change more quickly.

You can learn more about the campaign +2°C… Paris s’invente ! on the city’s website, or in an open-air exhibition in the parc de Bercy, until 31 January. 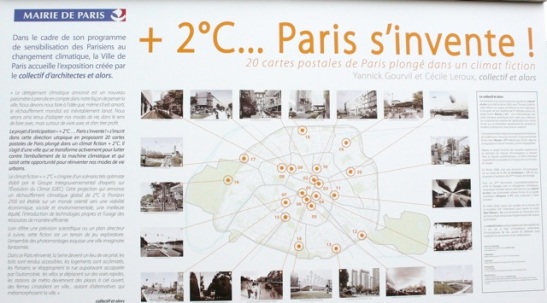