Père Lachaise: where the French ‘made the grave a garden’

Today, the cemetery in the 20th arrondissement of Paris is best known as the final resting place for such luminaries as Oscar Wilde, Edith Piaf and Jim Morrison. But it is an iconic place for another reason, as I am discovering in my research for a symposium at the University of Pennsylvania next Spring.

Père Lachaise was the first metropolitan garden cemetery, laid out to the east of Paris in 1804. It marked a dramatic shift in burial practices, and rapidly became the model for a wave of similar style rural cemeteries throughout Europe and North America. Immensely popular with visitors and even tourists, its fame was such that citizens of Philadelphia and New York spoke of creating their own Père Lachaise without needing to explain its style or location.

Before Père Lachaise, burials had taken place in squalid and overcrowded churchyards in the middle of cities: the tenth century Cimetière des Innocents in Paris, for instance, received over two million corpses and became home to vast trenches of rotting bodies; it was a feared, hostile wilderness. By the mid-eighteenth century, increasing prosperity, individuality, and family affection led to a desire to be able to mourn and commemorate loved ones; while growing health concerns about putrefaction and vapours from urban burial plots led some to imagine a return to classical-style burial in picturesque landscapes.

The Jesuit estate that was to become Père Lachaise, from François Marie Marchant de Beaumont’s guide to the cemetery, published in 1828.

Across Europe and North America, people began to argue for change, but it was Napoleon who finally made it happen. City burial grounds were closed and three sites were obtained to create new garden cemeteries just outside Paris. The first was Père Lachaise. Formerly a neglected Jesuit country seat with views over the city, the new cemetery combined elements of the existing classical French garden—axes, straight lines and allées of horse chestnut trees—with new sinuous paths, carriage roads and plantings inspired by fashionable English landscapes such as Stowe and Stourhead. In stark contrast with the horror of urban burial plots, Père Lachaise was imagined as an Edenic, idealised landscape, its curving pathways designed for sweetly melancholic promenades. For the first time, people could buy a burial plot in perpetuity, and engage in a more secular form of burial that celebrated the French ‘cult of ancestors’ over the old order of Catholicism and veneration of the monarchy.

the tomb of Héloïse and Abélard, as drawn by Augustus Pugin, c 1828.

To help market Père Lachaise to hesitant Parisians, famous figures such as Molière and La Fontaine were reinterred at the new cemetery. Even the purported remains of legendary lovers Pierre Abélard and Héloïse were transferred there. Its resulting popularity meant that Père Lachaise soon became crowded with commemorative monuments and family mausoleums filling the fenced private plots. In comparison with its many imitators, it was perceived as grand, dark and mysterious, with a mass of exquisite, expensive monuments, but perhaps as a less romantic and naturalistic landscape than many later examples of garden cemeteries.

It is easy today to overlook the significance of Père Lachaise as the early nineteenth embodiment of dramatic shifts in views on public health, familial sentiment, nature, and death itself. In its day it was a new style of burial ground that was ‘celebrated throughout the world.’ 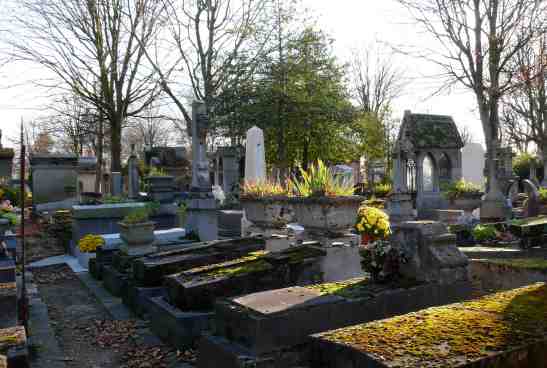 5 comments on “Père Lachaise: where the French ‘made the grave a garden’”